THE BALLOON AND THE WHITE STONE.: Komplettlösung Ultima 4

THE BALLOON AND THE WHITE STONE.

Enter the Hythloth Dungeon behind Britannia, exit immediately and enter the Balloon. Climb and descend to fly it, and use wind spells to steer. Fly West and North to the Serpent's Spine mountain range and land at the Avatar Symbol for the White Stone. You can also fly to Cove on the East shore of Lock Lake, otherwise accessed by entering a whirlpool while on a ship.

When you have all eight runes and mantras and are ready for elevation, meditate at each shrine for three minutes. After acquiring the items listed previously and talking to everyone for clues, buy the best weapons: three Magic Wands, three Magic Bows, one Crossbow, one Sling, and Armour for each character. Stock up on Reagents and food, then say 'Join' to everyone in the eight major towns to recruit your party. The only tricky ones are the Shepherd (enter Magincia, exit the gate and go South along the wall) and Geoffrey, the Fighter in Jhelom who won't join until your party reaches a high enough level. Now head for the Dungeons.

Two goals await: Finding the Stones at the Altars and using them in the Altar Rooms to get the 3-part Key. The Dungeons are connected by the Altar Rooms, but all three Altars can be found in Hythloth - so you can save time by visiting it after acquiring all eight stones instead of going to the Altar Rooms in the other Dungeons. The Stones are also necessary for getting through the Stygian Abyss. You can raise your Strength, Intelligence and Dexterity by touching Magical Balls in the Dungeons. This will cost the character some hit points, which can be restored with a Heal Spell. The sections on each Dungeon tell how to find these balls, the Stones and the Altars. Peer at a gem when you first enter a Maze, then check it again and compare with the directions if you get disorientated.

You can do them in any order; this path leads through the ones whose Magical Balls do the LEAST damage, to avoid depleting hit points too quickly. You'll have to decide which characters should touch a Ball, since they only work once. When told to go UP or DOWN, in these sections, this refers to using ladders, NOT casting those spells. The Dungeons are connected by the Altar Rooms, so always leave by the door you entered especially in Dungeons accessible only by boat. Otherwise you'll emerge outside a faraway Dungeon when you cast an X-it Spell.

Zurück zu: Komplettlösung Ultima 4: ON THE ROAD AGAIN. / VILLAGES, TOWNS AND CASTLES / THE SHRINES / ON YOUR OWN. / ITEMS FOUND ON THE SURFACE 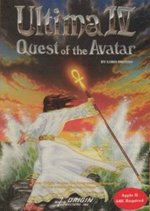